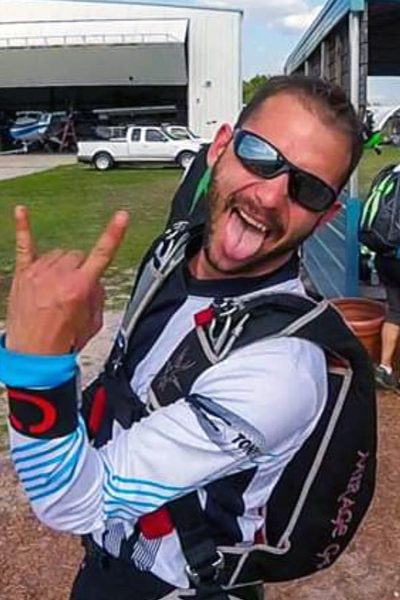 How many years in the sport?
12

When you were a kid, were there any early activities that might indicate you’d one day become a skydiver?
Growing up I was involved in gymnastics, football, scuba diving, acrobatic diving and mountain biking. Though I don’t believe they were indications, I believe I use them all in my skydiving.

What was the circumstance that led you to the DZ for the first time to make your very first skydive?
My brother wanted to do a tandem for his birthday and asked me to join. He was excited and I was scared. He’s adventurous and I do everything to the extreme. We signed up for The ground school and he would do one skydive while I would do 1200.

What made you want to continue skydiving after your first jump?
It’s just in my nature to see things through. As I progressed in my skydiving I found myself more excited for what it was really offering me. A place in my life where I could always be working towards doing better. Also, the people are my favorite part of the sport.

What’s the best / most memorable skydive you’ve ever made?
At Aaron’s 1200 skydives, being an AFF-I I took my brother in his 2nd skydive almost 10 years after his 1st.

If you could jump with anyone in the world, who would you like to jump with and why?
I would love to skydive with my Mother. I want her to see me in my happy place and give thanks to her for this amazing life we live.

As an instructor what has been one of the most meaningful jumps you’ve made with a student?
I had a student who refused to jump after hurting her ankle, canopy terrified her. After some discussion and remedial training we went up for our skydive. This was just a refresher but when she landed 20 ft away from me, she was in tears. She was so happy that she had found her place in the sky again and I’ll never forget the happiness that she had.

What about your daily work at Skydive City contributes to FUN at Skydive City?
Come out and see what its all about. Do a Tandem and consider taking a course. I could have decided not to come and I would have missed out on some of the closest relationships and best times of my life.