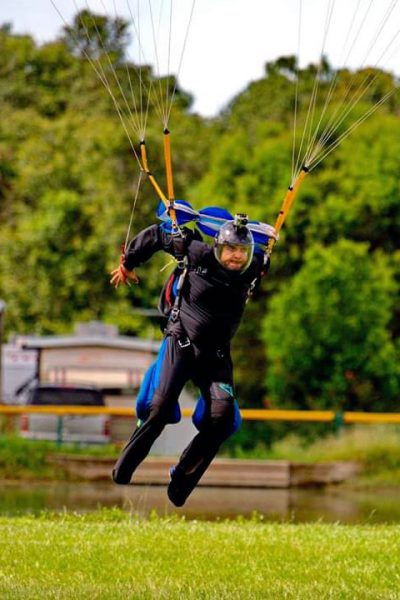 How many years in the sport?
13

When you were a kid, were there any early activities that might indicate you’d one day become a skydiver?
Absolutely not. I was an introvert. When people talk about traits of alpha and beta personalities, I was probably a delta personality. I was scared to shine and have any spotlights on me. Everything markedly changed when I started skydiving. The sport introduced me to a world not only I didn’t know it existed, but so many of the general public have no idea this world even exists.

What was the circumstance that led you to the DZ for the first time to make your very first skydive?
After a life changing event, I decided to look for an “extreme” hobby. The idea was to attempt multiple different ones and decide where I would go. Initially, I wanted to try skydiving. After some research, I learned that Tandem was the Segway to the sport. However, I couldn’t sign up for a tandem skydive due to my weight so my only option was to sign up with an AFF program to have the ability to skydive. Like many after the first skydive, I was hooked.

What made you want to continue skydiving after your first jump?
I was extremely nervous on my first skydive. I questioned my decision multiple times and looked for any excuse to back out. I couldn’t find any.

My first skydive was absolutely terrible. I was overwhelmed with sensory overload and extremely frightened. After the freefall portion, I had such a hard time following directions given through the radio mounted on my chest strap. I didn’t know right from left. I flared so high (30 ft off the ground) and held the flare until I crashed on the ground. On impact, I thought I broke my hip. I had to walk back limping to the backing tent with multiple people asking me if I was OK.

It was at that point where I decided that I will not fail at this. I decided that due to the horrific first experience, I will do what it takes to reach a mastery level of this sport.

What’s the best / most memorable skydive you’ve ever made?
The best skydive I made was an ordinary 4-way training jump. Working on 4-way, I have always striven to learn from the best. I sought many 4-way coaches and built my way up to world class coaches. This build up required extensive physical, financial and time commitment to achieve. On a training camp, I invited Niklas Hemlin to coach me. Niklas is Airspeed team captain and a famous world champion. Receiving coaching from Niklas is incredible, he has very high expectations from his athletes.

On this training jump, I started to feel overwhelmed with the amount of information thrown at me. I also felt the pressure to perform adequately in the presence of such high caliber of a coach. On the ride to altitude, I felt I was on the verge of collapsing mentally. So many things to think about and so many details to keep in mind. I visualized the skydive as much as I could and convinced my brain that I got this.

When we lined up at the door, Niklas had infectious determination look on his face which instilled calmness. I gave the count and we exited, while the exit went flawlessly, I looked across to clone, Nik Hemlin, and realized how lucky I was to be on the path I am currently on. I am receiving coaching from an icon in this sport. It was at that moment where 4-way and competition skydiving became my priority in life.

If you could jump with anyone in the world, who would you like to jump with and why?
Scott Rhodes. Scott was responsible to bring the US Army Golden Knights to a world class level in the 4-way and 8-way competition. Scott was also a pioneer in transforming the relative work competition world during his time to new horizon which nobody thought was possible at the time. Scott retired before I started competing. He is one of the world’s most famous skydivers who rarely known by skydivers.

What is most gratifying about your work at Skydive City?
The most gratifying in coaching and organizing 4-way and 8-way is to introduce individuals to a world that has a lot of potential in their skydiving life which can translate to their professional and personal life. 4-way and 8-way has the potential of improving and transforming its athletes and their life styles.

Back To Load Organizers