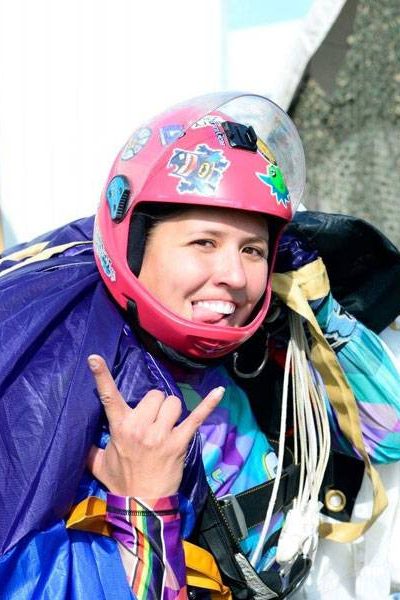 How many years in the sport?
6

When you were a kid, were there any early activities that might indicate you’d one day become a skydiver?
I pretended to fly on broomsticks like in Harry Potter.

What was the circumstance that led you to the DZ for the first time to make your very first skydive?
I finished reading the Divergent series and wanted to do something “Dauntless,” so I went to do a tandem with my sister who had already gone before.

What made you want to continue skydiving after your first jump?
I hadn’t felt that alive in a long time, but I caught the bug. I could think of nothing else. I was writing and dreaming about it. I was back at the dz the next week to do another tandem. I didn’t believe I was capable to learn to go alone, but that second instructor made it a training tandem. I even told him “I could never pull a parachute!” Luckily, he showed me that I was far more capable than I believed. I signed up for AFF that day.

What’s the best / most memorable skydive you’ve ever made?
So many to pick from, and there are a few that stand out, but at 40 or so jumps I was taken by an organizer on an 8-mile cross country high pull. It was a day with castle clouds and I got to fly with 8 friends and watch some of them do Canopy Relative Work (connect their parachutes) on the jump. I never wanted to come down and believe this is partly what started my love of canopy flight.

If you could jump with anyone in the world, who would you like to jump with and why?
If I could take anyone at any time I’d love to jump with Joseph Campbell, who is my favorite philosopher, and who’s words and philosophies really helped me through rough and scary times. I’d love to show him how his words like “Follow your bliss and the universe will open doors where there were only walls” have helped me “find my sacred space, where I can find myself again and again.”

As an instructor what has been one of the most meaningful jumps you’ve made with a student?
It is hard to chose one student in particular. There have been so many moments that you get to see someone do something they never thought possible. One that sticks out in my head was a recent tandem where the woman I took had a full-on epiphany about what really matters in life while we were under canopy. Just hearing someone say “None of the crap down there matters right now!” I asked her if she would like us to yell loudly together as we flew the parachute together, and as we did I could feel her just letting go of whatever had been weighing her down. Those are the moments we live for.

What about your daily work at Skydive City contributes to FUN at Skydive City?
It’s okay if you are afraid, sign up anyways. It’s good. Feel the fear and do it anyways. There is so much possible joy on the other side of that fear. Smile and laugh through the fear. After all, “The cave you fear to enter holds the treasure you seek.” -Joseph Campbell