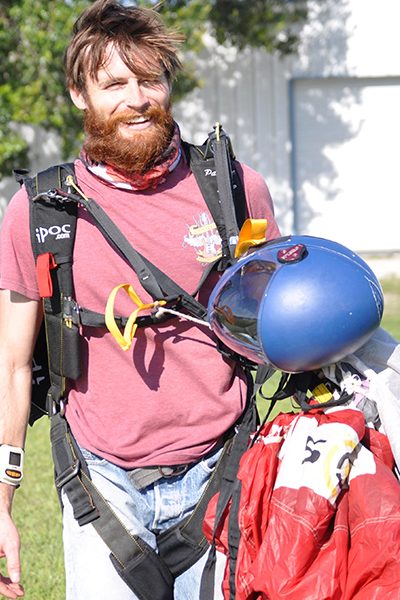 How many years in the sport?
8

When you were a kid, were there any early activities that might indicate you’d one day become a skydiver?
Absolutely! Snowboarding and dirt bikes were a passion in high school and after a few bad wrecks on motorcycles I decided to get out of the dirtbikes to save my brain. I still love snowboarding. My first skydive was a static line, I paid up front for the package before I ever jumped 🙂 I knew I’d love it I just had no clue it would be the only thing I could think about afterwards.

What was the circumstance that led you to the DZ for the first time to make your very first skydive?
Friends had always bailed out of doing a tandem, and I was sitting in the oilfield one day listening to a coworker say they were going to go jump on our next vacation because they had dreamed of flying a lot around that time. I called a dz located back in my home town and on my next vacation I went in to talk to the dzo . The Dzo said they didn’t have any jumps happening but he would call me when they did. I told him that would be great and handed him $2500. Money talks in this sport, 10 minutes after handing him the money I was meeting the instructor and about 7 hours later I had done ground school, 3 static lines and my first Freefall jump. I a licensed jumper 3 days later

What made you want to continue skydiving after your first jump?
My second and third jump were hardest, as I knew what to expect at that point. Those jumps weren’t easy but once I was in Freefall I knew I wasn’t turning back.

What’s the best / most memorable skydive you’ve ever made?
That’s a hard one, there are so many amazing memories tied to this sport. I’d have to say my good friends 1000 th jump. We cooked a bellymounted round cutaway system to him and I ended up with a partial malfunction during the jump. I was doing video though and didn’t want to chop unless I had to. Luckily I was able to fly the main in and get the whole shot. They put a picture of the jump in parachutist magazine and the video of us flying next to each other bickering about who should get to cutaway is hilarious.

As an instructor, what has been one of the most meaningful jumps you’ve made with a student?
I am a really new instructor, but I’d say taking an 89 year old woman on her first jump and being able to take her safely as super satisfying. I was terrified the whole time.

What about your daily work at Skydive City contributes to FUN at Skydive City?
I tend to be really positive and upbeat at work and I think that when people are struggling with work it gives them the motivation to push through it and have fun with it!

What is most gratifying about your work at Skydive City?
I get to help people fly all day long, and give them their first experience in the sport!