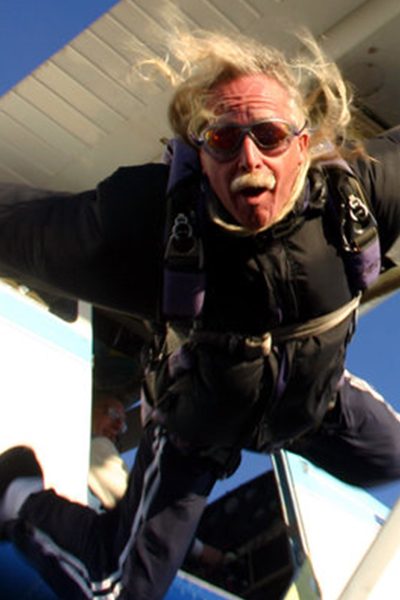 How many years in the sport?
37

When you were a kid, were there any early activities that might indicate you’d one day become a skydiver?
My Dad was in the airborne and fought in Korea. When I was little, he would tell me stories of airborne school and jumping out of an airplane. I knew from when I was very little that I wanted to jump out of an airplane like my dad.

What was the circumstance that led you to the DZ for the first time to make your very first skydive?
My birthday was approaching in 1982 and I was looking for something to do on that weekend.

What made you want to continue skydiving after your first jump?
I had no real idea that skydiving was a sport until I made my first jump at 22. While I was waiting on the ground to make my first jump, I saw the experienced jumpers in freefall and I said to my instructors then that next year, that would be me.

What’s the best / most memorable skydive you’ve ever made?
First jump at the World Championships in Spain, 1989.

If you could jump with anyone in the world, who would you like to jump with and why?
I would love to make a skydive with Valentino Rossi. Possibly the best motorcycle racer who ever lived. I’ve been a huge fan of his for years.

what is one of the best customer experiences you’ve had at Skydive City?
There are really too many to even begin to pick one but if I have to, I guess my 2000th tandem jump would qualify. The passenger sent me a large framed photo of us in freefall. I still have the picture.

What about your daily work at Skydive City contributes to FUN at Skydive City?
The interaction with the folks in the loading area and on the ride up in the plane. I think that the staff has a great rapport with our customers and we work really well together. We practically have our own comedy routines that really keep them entertained and at ease.

What is most gratifying about your work at Skydive City?
It never gets old watching people, tandems and AFF, making their first skydives and learning the sport. It’s hard not to enjoy yourself in a place where everyone is having so much fun all the time.